Keeping an Eye on the Whales 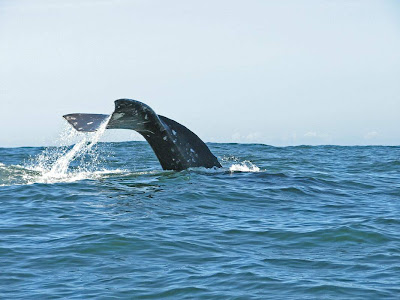 What’s as big as a big yellow school bus, weighs as much as 35 VW bugs, eats a ton of amphipods and mycid shrimp (each one no bigger than an M&M), and swims 12,000 miles a year between the Arctic feeding grounds and the good times in the Bay of Cortez?

Having mated or given birth in the warm waters off the coast of Mexico, the big critters on now on their way north to the cold, food-rich waters off the coast of Alaska. People who have gone on whale expeditions to Mexico report that the whale mommies bring their calves (around 15 feet long) right up to the boats where they can be kissed and petted. You can even rub their gums, something that seems to give these big babies a lot of pleasure.

The whales don’t eat in Baja (too many other fun things to do like mating and giving birth) so the migration north is the time to get serious about putting on the pounds. They’re also not in such a big hurry (did we mention mating and giving birth after a 12-month pregnancy?) so the Oregon coast offers a great opportunity to get a look at a whale or two. They will be swimming north between 3 and 5 miles offshore, although they come in closer if there are good food sources for example near the headlands. Be on the look-out for spouts, rolling backs, and occasionally a nose (spyhops) or a tail (fluking). Although Grays are not known for breaching—that dramatic moment when ¾ of a whale comes up out of the water—they do occasionally, particularly upon arriving at their feeding grounds.

The migration north lasts from March to June along the Oregon coast, as 18,000 Very Large Animals move past, immature animals, adult males, and females without calves first, then the mothers and calves a little later. There are also resident Grays which decide, for whatever reason, to hang around. There is almost no time of the year when there isn’t a whale out there, but the concentration of the spring migration makes it more likely that you will see one—or more than one!

Trained experts are available at the official Whale Watching Spoken Here sites between 10 a.m. and 1 p.m., March 23-30, 2013. More information is available at the Oregon State Parks & Recreation whale watch website, www.whalespoken.org, or by calling The Whale Watching Center in Depoe Bay, 541 765 3304. Local visitor centers along the coast will also have information. Check out the Yachats Visitor Center, 541 547 3530 or 800 929 0477.

If you want to look for whales in a serious way, be sure to dress for weather that can range from cold, windy and wet to glorious sunshine. Layering is the way to do it, and don’t forget your sun screen. Bring binoculars and patience. Forget your cell phone and your daily obligations and get into a different rhythm. And remember: even if you don’t see a whale, you’ll be looking out at the great Pacific Ocean, a spectacular, inspiring vista in its own right.

Posted by Yachats Beach Blog at 11:59 AM