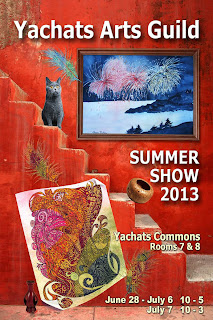 The Yachats Art Guilds Summer Show opens on June 28 and runs through July 7, in rooms 7 and 8 at the Yachats Commons. The display includes oils and acrylics, wood carvings, watercolors, pen and ink, pencil, pyrography, and mixed media, as well as photographs inspired by the beauty of the “Gem of the Oregon Coast.”  All the art is for sale, as well as cards and prints.

The Yachats Art Guild has grown from the seven original founding members to 34 members dedicated to supporting and promoting Central Coast artists as well as the natural beauty of the area.  Works by members of the Yachats Arts Guild grace local galleries, restaurants, and hotels. The Guild maintains a permanent show at Ona Restaurant in downtown Yachats and at the Yachats Public Library. There is also a “Perpetual Art Walk” that pairs local artists with merchants in the area. Upcoming shows include the Yachats Arts Guild Fall Show, a show at the Siuslaw Library in Florence in September, and a show at Canyon Way in Newport in 2014.
The Yachats Arts Guild Summer Show, rooms 7 & 8, Yachats Commons (off Highway 101 next to the Bank) June 28-July 7 from 10 a.m. to 5 p.m. except on the last day when the show closes at 3 p.m. For more information, visit www.yachatsartsguild.com, or the Yachats Arts Guild Facebook page.
Posted by Yachats Beach Blog at 1:11 PM