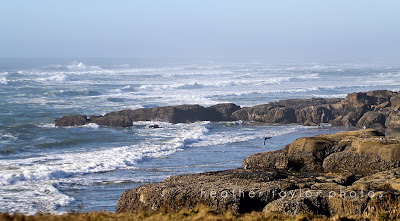 Walking the historic Yachats 804 Trail connects hikers to local coastal history. The trail probably first served as a footpath for tribal people, later becoming part of County Road 804, which included the 7-mile stretch of beach between Yachats and Waldport at low tide. County Road 804 served as the settler's route of travel between the farmland of the upper Yachats River valley and Waldport's Alsea Bay until the 1930s and the completion of Highway 101. The highway replaced the oceanside portion of County Road 804, and it reverted to its ancient use as a footpath.

During the 1970s, local citizens began a campaign to preserve the 804 as a public trail. Years of legal battles ended with a ruling by the Oregon Supreme Court to keep the public right-of-way and in the mid-eighties, the ¾ mile section from Smelt Sands State Park north to the beach became part of Oregon State Parks.

Successful mediation with local home owners in the late 1990s allowed for the completion of the 804 Trail South. The 804 Trail South is about a mile in length, stretching from the south edge of Smelt Sands Recreation Site, across the lawn behind the Adobe Resort, and through oceanside neighborhoods to the north side of the Yachats River, Yachats State Recreation Area, and downtown Yachats.

The city’s commitment to trails for safe pedestrian use has resulted in a network of trails through Yachats. The trails connect to the Amanda Trail south of town, and up to Cape Perpetua and beyond. Volunteers and city workers, in partnership with State Parks and the US Forest Service, maintain the trails, build new trails, and develop maps and signage.
(This article is a modification of the Yachats Chamber of Commerce history of the 804. More information is available online.)