Cars and Bikes—Let’s All Be Safe This Summer!


It’s summer, and there are plenty of two-wheelers on the coast roads--taking the turns on 101, pumping hard up and over the coast range, or taking a leisurely ride through pretty rural valleys. Oregon welcomes cyclists and encourages cycling adventures as an integral part of the TravelOregon story, so now is a good time for everyone—motorists and cyclists—to keep a few safety thoughts in mind. 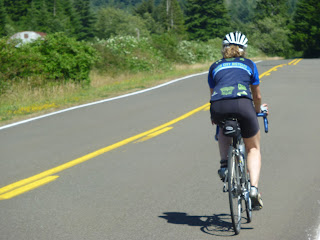 For example, sometimes it’s a pretty tight fit going around the curves south of Yachats.  While the bike lane can be up to three feet wide, there are places where it narrows next to a guard rail or just plain disappears under overgrown vegetation. Cyclists are often in the traffic lane and even where they are safely on their side of the fog line, cautious motorists tend to pull over to give the bikes plenty of room. Oregon law allows drivers to pass bicycles on the left by moving across the center line as long as the “center is unobstructed for a sufficient distance to permit the driver to pass the person operating the bicycle safely and avoid interference with oncoming traffic.” 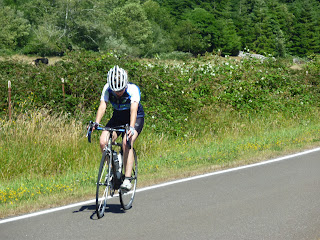 Most cyclists take advantage of the north winds and ride south along 101. Coming up suddenly on a line of cyclists, drivers tend to move out into the other lane—which means everyone needs to stay very alert, including the people driving north. 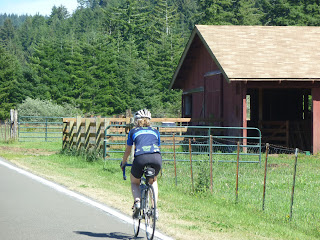 On most rural roads, there is no bike lane. This means that cyclists and motorists are sharing the road. Take that phrase to heart. Sometimes there are whole families riding their bikes up the Yachats River Road. It’s a beautiful ride past grazing cows, solid red barns, alpacas and llamas, and views of the wooded hills. In fact, with the Third Annual Yachats River Valley Farm Tour coming up on August 18 (see GoYachats.com/events for details), Biking from farm to farm would be a great way to see the valley up close.

Sometimes there’s no alternative to just simply slowing down. Going around curves, drivers can come upon bikes suddenly. With the play of light and shadow on the road, bikes and their riders are often difficult to see. Assume that you won’t be able to pass safely and drive cautiously. It really won’t hurt to slow down. After all, that’s the whole point of being on vacation, isn’t it? And if you’re a local trying to take care of all the ordinary chores, slow down anyway—just remind yourself that you are lucky enough to live in a place that people come to on their vacation!
Posted by Yachats Beach Blog at 6:29 PM