“The nicest people in the universe….” 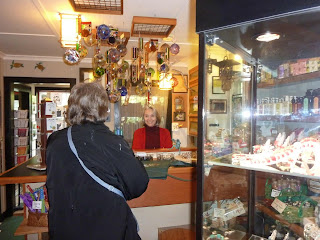 Valeria drove north along the coast from San Francisco. It was late spring, 1985, and the California hills had already turned the tawny color of a lion’s back. Until she reached Oregon, where suddenly everything was green. The further north she went, the greener it became. “It was like nowhere I had ever been before,” she said.

Back home in Indianapolis, she subscribed to Oregon Coast magazine and found real estate bargains she couldn’t believe. There was a house, right on the beach and—“almost free!” So she loaded everything into her car and headed for Florence (which, being the place where the magazine was published, seemed to be the center of the universe.)

Surprise, surprise—the house on the beach was a wreck and Florence, it turned out, was not the center of the universe. But there she was, ready for something brand new, so she began a methodical search of the coast, driving from Brookings to Astoria, Astoria to Brookings.

“I narrowed it down to Bandon, Yachats, and Neskowin,” she says. But in Bandon, all the realtors were on vacation. In Neskowin, there were no realtors at all. And in Yachats, the owners of the house she wanted to look at were in Mexico and couldn’t be reached.  But there was another house, halfway between Waldport and Yachats…

Not long after that, she started a little gift shop and called it ToadHall. She’s never looked back, not even when the snows of ’89 blanketed the beach and drifted against the Little Log Church and she thought just maybe she should have packed her cross-country skis in the car.

It wasn’t about the weather, she realized. It wasn’t even about the gorgeous setting of green trees and sparkling ocean. It was about people and community. In Yachats, you could get a book from the library without producing ten pieces of ID. At the grocery store, the person with five items, standing in line in front of you, lets you, with just two items, go first.

One evening, Valeria left ToadHall at the end of the day, forgetting to lock the doors. The lights were on, and the music too. Eventually, a neighbor came in, turned out the lights and shut off the music, then drove to her house to make sure she hadn’t been abducted by aliens. When she came the next morning, she looked around. People had come in, thinking the store was open. On the counter she found handwritten receipts and money for items people had bought.

“The people in Yachats,” says Valeria, “are the nicest people in the universe.”
Posted by Yachats Beach Blog at 5:14 PM