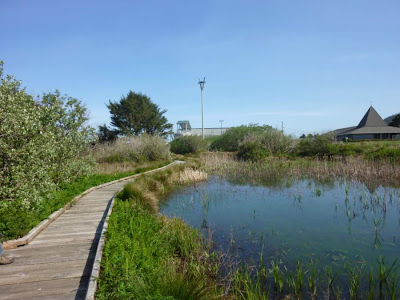 On a sunny May morning, my dog and I explored the Yachats Wetlands Community Park. Red-winged Blackbirds trilled from the willows and cattails where they make their nests. Wilson’s Warblers flittered over the reeds like gold coins tossed in the air. American Goldfinches, sometimes called the wild canary, surrounded the feeder at the end of the boardwalk, where we turned and walked through a shady forest of shore pines. The thick duff muffled our footsteps before we wandered back on another path to see Black-headed grosbeaks, a beautiful orange bird with black and white stripes on its wings.

A Great Blue Heron has also come to live in the wetlands. Although these shy birds usually take off in an improbable squawking flight when someone intrudes on their space, this one has gotten used to visitors. Of course, the ready supply of frogs, its favorite diet item, is a big incentive to stay calm.

Suddenly there was a dramatic air battle going on above my head. Two crows were pursuing a Merlin falcon, sometimes called a pigeon hawk. Similar to the Peregrine falcon, this raptor preys on other birds. The crows swooped and attacked and finally chased the falcon off.

I sat on a bench and waited for the high-pitched frog chorus to start up again. Spring peepers--also called green chorus frogs. What a perfect name for these bright light singers of the season! I didn’t hear the slightly deeper tone of the endangered Red-leg frog, but the restored wetland has provided habitat for them too.

This healthy wetland area is the result of years of dedicated work by a committee of Yachats folks, including horticulturists, botanists, fish biologists, hydrologists, and many others willing to do the hard work of recovering a natural habitat that had been lost over the years to a snarl of blackberries, trash and dirt. The City of Yachats was a generous partner. For awhile, it felt as if the mess had been exchanged for a wasteland, as front-end loaders cleared out the blackberries and trash, but gradually, the area has recovered. It is the natural catchment area for the water that runs off the hills on the east side of town, and the shallow ponds began to fill up. The boardwalk was built and volunteers brought in and planted native vegetation.

The Wetlands Community Park is located behind the Commons and maps are available online at GoYachats.com or at the Yachats Visitor Center. It can be part of a longer hike on Yachats’ extensive trails, a pass-through on your way to a latte, a bird-watching expedition, or just basking in the morning sun.
Posted by Yachats Beach Blog at 5:07 PM