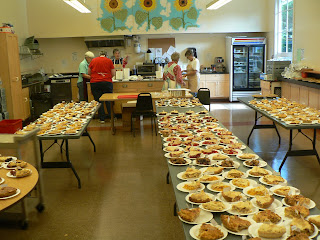 When you head over to the Yachats Ladies Club on Saturday (visit GoYachats.com for hours and location) for the pie social, take a minute to appreciate the ladies and what they have accomplished.

The Yachats Ladies Club started in 1927 with fourteen members and a purpose: to promote the welfare of the community. They met in members’ homes, charged 10 cents at each business meeting for dues, and raised additional funds by making and selling quilts and aprons, holding banquets and dances, and organizing a Christmas bazaar.

When the state of Oregon announced they were going to demolish the Yachats Dance Hall to make way for a park at the point, the members of the club decided to buy the building for a clubhouse. That was in March, 1928; by the end of the year, the Ladies Club had $100.32 in their treasury.

The amount of money they needed was daunting. The state agreed to sell the dance hall for $100, but they needed a place to put it. Sir Robert Perks, an Englishman who owned much of the available land in Yachats at that time, agreed to donate the lot on Third Street, and the stumps were removed with 20 pounds of blasting powder. The dance hall was moved at a cost of $500, and they bought a piano for $100. Money was borrowed and paid back over time. There were expenses for insurance, licenses, and other fees. Over the following months, the ladies continued to hold fundraising events, collect dishes and silverware to equip the kitchen, and do all the work to finish the hall and make it useable.

For many years, the Ladies Club was the only place in town available for meetings. Church services were held there as well as card games. A lending library was established in 1930. And of course, the dances: every Saturday night, various musicians rented the hall. The club members ran the ticket booth, the checkroom, and the food and soda pop concessions. The musicians provided their own floor wax. Things got rowdy on a Saturday night in those days. The musicians were supposed to keep the good times under control, but some damage occurred. 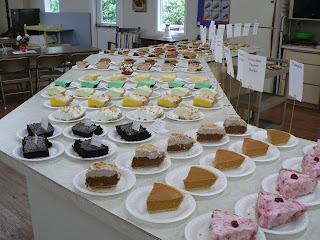 The pie social started on the Fourth of July, 2002. They had to move that event to the Commons because of demand, but the pie socials on Memorial Day and Labor Day weekends still take place at the newly refurbished Ladies Club on Third Street. “It’s a thing,” says club president Sandy Dunn. Indeed it is, with just about every variety of pie you can imagine. Be sure to get yours this weekend!
Posted by Yachats Beach Blog at 2:21 PM