Dining Al Fresco—From the Bay to Your Bucket 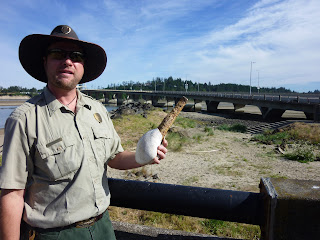 State Ranger Cameron Rauenhorst, known affectionately as Ranger Clameron, grins as he holds up a BIG shell. A seven-inch neck protrudes from the shell and Clameron tells us that fully extended the neck can be nearly three feet long. Known as a Gaper, Horse, Horseneck, Blue, or Empire clam, this bivalve is one of the many clams that you can harvest on Oregon beaches. Clameron dug up this particular Gaper at low tide in Alsea Bay.

“Look for the show,” he tells us. The show is the oval hole left in the sand by clams at low tide. In the case of the Gaper, it is nearly two inches in diameter. Though smaller clams are found closer to the surface, the Gaper requires a serious hole—two feet deep in some cases. “Grab a small child by the feet,” says our grinning guide, “and hold him over the hole to dig the last couple of inches by hand.”

In a net bag, Clameron displays the smaller hardshell clams he dug that morning. Butter clams, cockles, and littlenecks are also found in Alsea Bay. Someone asks where to dig. Turning toward the Alsea Bay Bridge, Clameron points to the Y-shaped cement supports, telling us that it is the largest Y-leg bridge in the country. In the arch between the third and fourth Y, he says, you’ll be able to dig your limit in about twenty minutes. (The limit is 20 clams per person per day, of which only 12 may be the big gapers or geoducks. See sidebar for daily limits for all shellfish.) 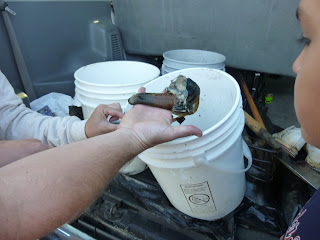 Moving over to the seawall, Clameron explains how to bait a crab trap—chicken, fish, turkey, mink, or ghost shrimp all work well—and tosses a crab ring over the edge. If you were on the docks or a boat, you would let the ring  soak for 15-20 minutes before hauling it back up. “Do it fast,” he warns, pulling the rope up hand over hand with a well-practiced motion. “If you dawdle, the crabs will crawl right out and escape.” Crab pots actually trap the crabs and can be left for up to three days.

Another option is the “crabhawk,” which you hang from the end of a fishing pole. When the crab crawls onto the screen to get the bait, there is a tug, your signal to reel in the trap, which automatically closes as soon as you start pulling it in. (Designed by Steven DeMars—visit www.crabhawk.com for more information.)

Oregon State Sport Fishing Regulations allow you to keep only male crabs—the females are laden with millions of eggs and harvesting them will jeopardize production of future crabs. Cameron demonstrates how to sex a crab: the female’s abdomen is wide, the male’s is narrow. If you need help, check it out in the pamphlet Crabbing in Oregon.

Crabs must be at least 5 ¾ inches measured in a straight line across the back immediately in front of the little bumps on the side of the crab. All females and undersized crabs must be returned to the water carefully and immediately.