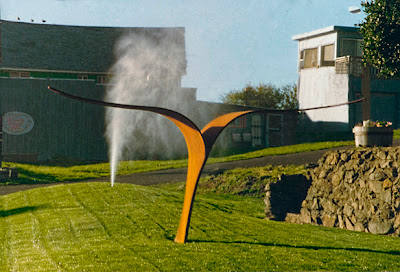 For the past twenty-four years, a spume of water has sprayed into the air every minute or so from Memorial Day to Labor Day. Kids shriek as they run through the spray. Lovers know it’s good luck to have the spout go off as they walk past. Drivers passing through Yachats turn for a second look as the spray hits their windshields. Was that…a whale??

Yes, it’s a whale! The Whale in the Park was the brainstorm of local metal sculptor Jim Adler. The rock wall of the little park suggested a fjord to his fertile imagination; a photo of a whale sounding, its powerful flukes arched against the sky, inspired a vision for a whale sculpture. At first, Adler thought installing a pump too “kitschy” to represent this dignified animal. But the spout is what we know of whales, the signal that alerts whale watchers that there is an animal of great power gliding below the surface. The pump became part of the project.

The whale caught the imagination of the entire community. A committee, including Tom Smith, Joanie Bicksler, Karen Schuster, Mary Welch, Judy Grist D’Ville, and Mary Shelley among others, sold sweatshirts with the iconic swoosh of the whale’s tail, and mailed out a whale poster to potential donors—theirs to keep whether they sent money or not. Most sent money. The Oregon Arts Commission approved a grant. The Yachats city council gave permission to install the whale in the park after Adler showed them a maquette of the sculpture, complete with a bulb to simulate the spout.  Councilman Burd Bicksler was paying careful attention when the spout went off…

The flukes were cut at Far West Steel in Eugene and shipped to Marks Brothers Rolling & Fabrication in Portland. A machine the size of a Greyhound bus bent the metal to Adler’s specifications. Then a jig was formed so the other side would come out the same. The folks at Marks Brothers were so excited by the project that they insisted on welding it themselves. Rod Smith offered to drive his truck to Portland to pick up the tail.

Back in Yachats, a group of volunteers waited at the park next to Lee Green’s logging truck and crane. Someone made a movie. Unfortunately, Smith had had a flat tire and didn’t arrive until the next day, so the film just shows everyone waiting for the whale. Finally, the massive sculpture was put in place and a cement base was poured to support it. Adler built and installed the pump. Central Lincoln PUD put in the electricity and the city supplied water. Forty yards of top soil and mushroom compost were delivered. Adler rented a truck from Rick Boston, drove to the Valley, and filled it up  with turf. Then, just when the exhausted volunteers were too tired to do one more thing, Vince Bittel showed up and laid out the turf.

Adler the Artist turned into Adler the Maintenance Man, turning the pump on in the summer and off in the fall, maintaining it and stringing rubber bands and gaskets together to keep it functioning. The city, which decided not to take ownership of the sculpture or provide maintenance, continued to provide water except in a few very dry summers.

The whale is a powerful symbol in our myths and stories. The Whale in Yachats celebrates that power, the power of creativity and imagination, and the power of a community of people working together.
Posted by Yachats Beach Blog at 3:21 PM